In this section of the website, we thought we would share some of the formulas we use the most in our day to day activities.  ​If you are going to be working in this industry, then, math phobic or not, you will need to use some basic formulas to help you evaluate equipment performance and make equipment selections.  Virtually all of them will have their roots in something fairly complex, like an equation of state ...

or a fundamental thermodynamic equation like the steady flow energy equation.

But fear not;  given the constraints that our systems operate under, most of the things we need to evaluate allow us to make simplifying assumptions and substitutions that make the mathematics much more palatable.  For instance, when applied to a mixed air plenum, the steady flow energy equation illustrated above can be reduced to a number of useful, relatively simple expressions, like the following.

If you are curious about exactly how you get from the steady flow energy equation to the outdoor air percentage relationship, our blog post Economizers–The Physics of a Mixed Air Plenum illustrates just that.  And the variations on the them that you can come up with are handy enough that we built them into a spreadsheet that we share in the resources section of the website.

Having said that, you can jump to the list of equations using the button below (or just navigate to the one you want from the drop down menus).  But if you want to learn a bit about good practice in terms of documenting what you are doing and some of the resources that are included with many of the equation pages to help you with that, then take a look at the discussion on documenting your math that follows.
List of Formulas and Equations

Back in the olden days, when a spreadsheet was a piece of paper that you wrote on with a pencil to document the math you were doing manually or with a slide rule or with a four function calculator, we were a lot more rigorous about documenting the relationships we were using than we seem to be with modern spreadsheets.   Jerry Williams once said to me:

David, if a client were to call me and ask a question about the engineering in one of your projects
while you were on vacation, your documentation of how you reached a conclusion should be
good enough that I could figure it out just by looking at your (pencil and paper) engineering
calculation sheets.

I could see the wisdom in that and worked to train my self to write down the basic relationship I was using along with documenting the steps I took to evaluate the relationships as I worked through the math.   But as I moved to electronic spreadsheets, I found I was losing touch with that first step of documenting the relationship.
That was partly because it was really hard to type in all of the symbols and formatting we use in math - things like brackets and subscripts and square root symbols -  especially in the days before we had things like true type fonts.  In contrast, it was really easy to click into a cell and type out a formula once you understood how a spreadsheet worked.

​I tended to do that by putting my variable into cells so they were identified and could be easily changed, followed by a cell that had the formula in it and pointed to the variables, as illustrated below on the right (the actual spreadsheet) and on the left (the spreadsheet with the formulas exposed).
But with an electronic spreadsheet, it is also quite possible and easy (especially if you are in a hurry) to just enter everything into a cell so that all that showed up was the answer, as illustrated below (right and left are the same convention as above).
For someone looking at a printed copy of the spreadsheet, it was something akin to the famous Then a Miracle Occurs cartoon by Sydney Harris.  An in abbreviating the documentation of my math to this level, I realized I was letting Jerry down and decided to do something about it.

Initially, I simply typed out the formula as best I could with the available font set.  This could be really painful for large formulas and/or formulas with subscripts because of what you have to do to get a subscript to show up in Excel.
​To save some time, I made a master spreadsheet where I kept formulas after I created them the first time so that I could just copy and paste them into documents, spreadsheets and presentations.  But sometimes, if you didn't do it just right, you would loose the subscript formatting in the paste process and have to do that part all over again.

Then, I discovered that the Microsoft Office product line had a feature called Microsoft Equation 3.0 buried in it.  It showed up in what ever menu was used by the application to insert an object.   Here is what that looked like in PowerPoint 2013. 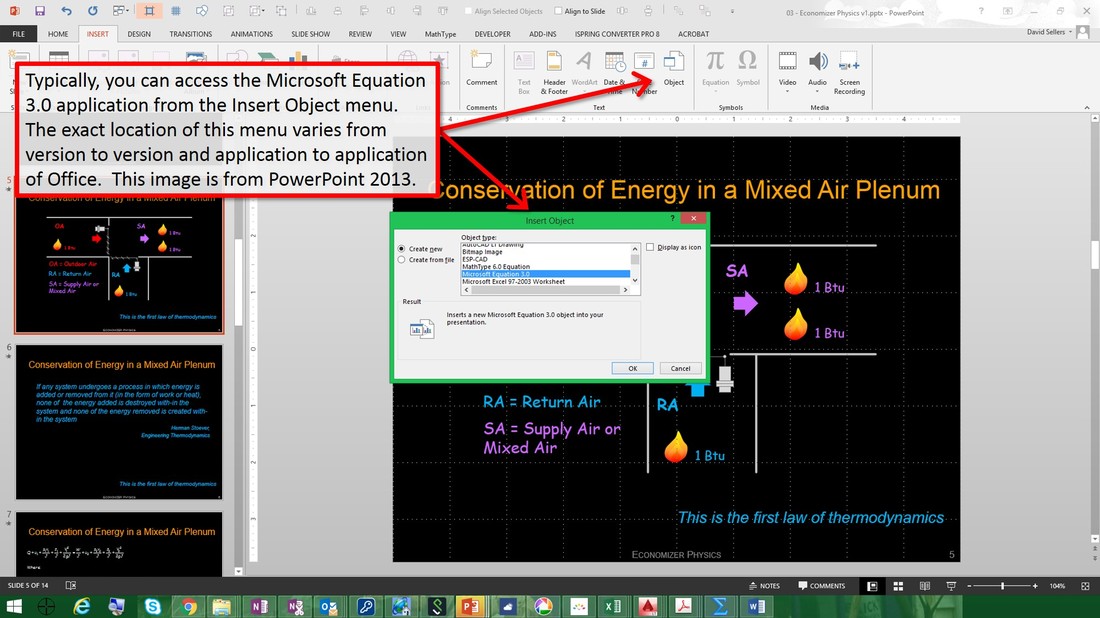 When you selected it, a dialog box opened up that allowed you to select from all sorts of math specific symbols, set up superscripts and subscripts, add brackets, set up fractions, anything you needed to do.  So, I quickly started using that to document my work.
It turned out that when you saved an equation you made with Microsoft Equation 3.0, it was saved as a .wmf file (Windows Meta File), which is an image format that Microsoft came up with for their Windows operating system that supports both vector and raster graphics. That meant that even if someone did not have Microsoft Equation 3.0, they could still insert the images I saved into their work to document what they were doing.

​So one of my goals when I set up this part of the website originally was to provide you with the .wmf  files for each equation or formula I made a page for so you could start using them to document the math in your work by simply inserting the image. Plus, if your office product had Microsoft Equation 3.0 enabled in it, then you would be able to edit the files or even create write your own equations. ​

But sadly, Microsoft Equation 3.0 went away from all Office products in a January 2018 security update.  Initially, I didn't realize this had happened because I had upgraded to the professional version, which is called MathType because it gave me some very helpful functionality given that I do a lot of technical training and presenting and need to share equations with folks in presentations and spreadsheets.

But the disappearance of Microsoft Equation 3.0 means that while you can still insert the .wmf files we provide as images into your work, you will not be able to edit them unless you purchase a subscription to Mathtype (although you could briefly edit them during the free trial period).  If you want to use the .wmf files of the equations, then it may actually be worth installing the free trail because it also installs all of the font libraries you need to view the equations, which may or may not be included with the software you have.   And, as I understand it, when the free trial expires, the fonts are left in place, even though the editor will no longer work.

And, I should point out that Microsoft replaced Equation 3.0 with a different equation editor, which is typically located in the "Insert" menu. 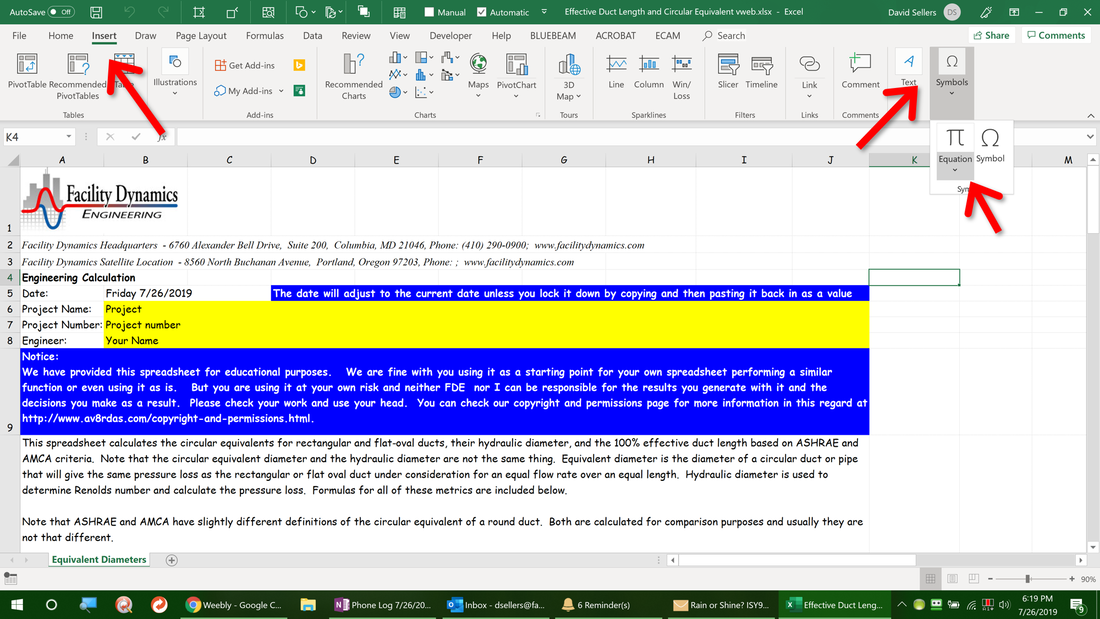 So there is a math friendly way to insert equations into your work via that avenue.  The problem is that it will not open and edit the legacy Microsoft Equation 3.0 files.  So for editable equations, you (and I) will need to start from scratch or subscribe to MathType.  I should mention that another potential benefit of MathType is that it works across platforms, meaning if you have it, you can open the equations on Apple products in addition to Windows products.

Bottom line, Mathtype is my solution for the time being in the interest of expediency (I have in the range of 400 equations saved in the .wmf format at this point).  But I did play with the new editor a bit once I realized it was there and it is much more functional that the original version of it was (for a while, you could use Equation 3.0 or what was apparently, the early development of the new editor).  So I suspect I will eventually migrate to it an make the equations available in that format.  But one of the limitations there it seems is that sharing the equations you create is not as easy as you might think it would be.  So, I need to get that figured out first.

In any case, just to be sure we are on the same page about all of this, Microsoft Equation 3.0, MathType, and the new equation editor allow you to document formulas so you can insert them into your various work products.  But you still have to do the math with a pencil and paper or slide rule or a calculator or by creating a formula in Excel or by typing the formula in OneNote and hitting "Enter" (betcha might not have know about that feature of OneNote).

Moving on, we anticipate this section of the website will always be growing, so check back if you are looking for a formula and don't find it;  we plan to keep adding things as time permits.  Or if you want, you can contact us and let us know what you are looking for.  If its a formula we are familiar with but have not gotten around to sharing, we will try to move it to the top of the stack.

As is the case for the other resource sections, what follows is a gallery with the various formulas in it.  So, just scroll down to see what is available currently.